A common question I see being asked on Excel forums is how to create Excel dependent drop down lists, that is to say that the list you get from a validation rule must depend on what has been selected in another cell.

Using tables makes it so easy

Assume you have the following list of continents and you want your drop-down to display only the Countries of that continent. 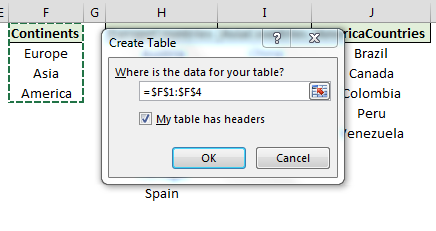 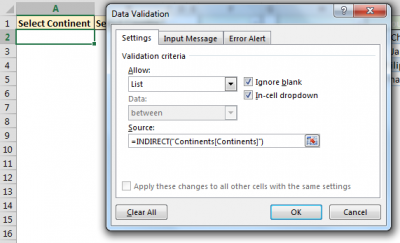 Inside the INDIRECT functions we are placing the reference to the first table we have created where Continents refers to the name of the table and [Continents] is the header name, so if you are using another data set you have to do: TableName[HeaderName]. Think of it as a sort of SQL where you would be doing SELECT Continents From Continents. After you have added this you can see your drop-down list:

In cell B2 we will now add our second validation rule which will depend on what we have selected in A2. Select B2, go to Data Validation and add the following rule: =INDIRECT(A2&”Countries[“&A2&”Countries]”)

The above formula is concatenating what you have selected in A2 with the word Countries. Remember we have named the countries tables as “EuropeCountries”, “AsiaCountries”, “AmericaCountries”? This is what links both drop down lists.

The magic of Excel Tables

The above example can easily be expanded to a cascade drop-down list. Imagine that you want to add another Drop Down in column C for the cities. You would create new tables for each Country and name them CountryCities, for instance PeruCities, BulgariaCities etc. Then use the same logic to apply your validation rule in cell C2.

This method works well for a cascade of up until 3, maybe 4 steps. For longer cascades we will need to venture into programming, where it is also possible to do it by pulling data from a Database like Access or MySQL and doing it via a UserForm. But this will be the topic of another post.