Today I stumbled upon the M function List.Zip which I thought would provide a valid alternative to my previous post  about replicating SUMPRODUCT in Power Query.

Thanks to this, we can build another function which takes in a list of lists and performs the SUMPRODUCT:

Starting from a table like the one below, which I have called Sales, we can now easily create a SUMPRODUCT of all the columns: 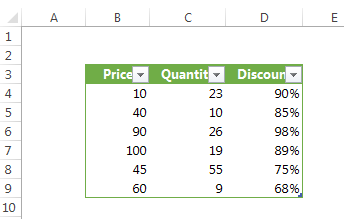